Introduction
In the dim and distant past, well at least as far back as the 1960's and 70's, paper tape was one medium used to store and load programs into computers. There are, for example; images on the web of a roll of paper tape which is an 8k BASIC for the Altair 8800 computer (1975).

In fact, paper tape was used even earlier than that, as the input medium to the COLOSSUS computing device designed and built at Bletchley Park in the UK in the early 1940's. Tape was read into COLOSSUS at up to 30mph; and there is a reconstructed COLOSSUS reading tape at 5000cps (characters per second) at the the National Museum of Computing at Bletchley Park. The teletype input tape was being read to decrypt messages encrypted by the Germans using their LORENZ machine for communciations during World War II.

The first picture belowto the right shows some 5 bit paper tape loaded onto spools on the COLOSSUS, and just to give a perspective of the size of the machine; the picture to it's right shows the paper tape assembly with a member of staff at Bletchley Park loading a tape onto the machine. 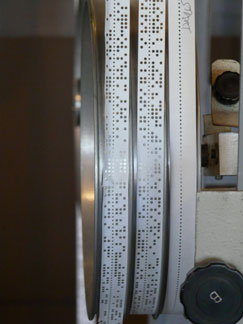 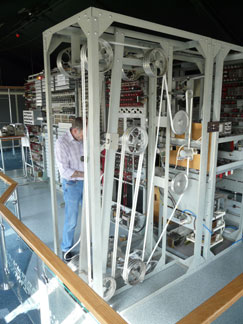 Computers and paper tape
For computers, paper tape was regularly punched or read on Teletype ASR-33's such as the one shown below. to the right. This was how I first experienced paper tape. 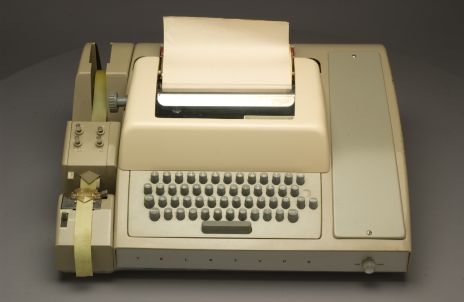 The first programs I ever wrote in the early 1970's were on a Teletype ASR-33 using paper tape as the method of storage. The ASR-33 was one of a number which were connected to a Data General Nova computer at Newcastle upon Tyne Polytechnic, (now Northumbria University).

Unlike COLOSSUS, the ASR-33 read and transmitted characters at a maximum of 10cps; 30 years on, but some 500 times slower!

Types of Paper tape
Paper tape was originally supplied as a roll, first picture below, shown immediately to the right, then later as a fanfold format,

By the time I started to use paper tape, the format in use was 8 bits, although there have been variants in use with 5, 6 and 7 bits.

The picture immediately belowto the right shows two rolls of paper tape; one of which has been punched in 5 bit format, the other in the more recognisable 8 bit format. 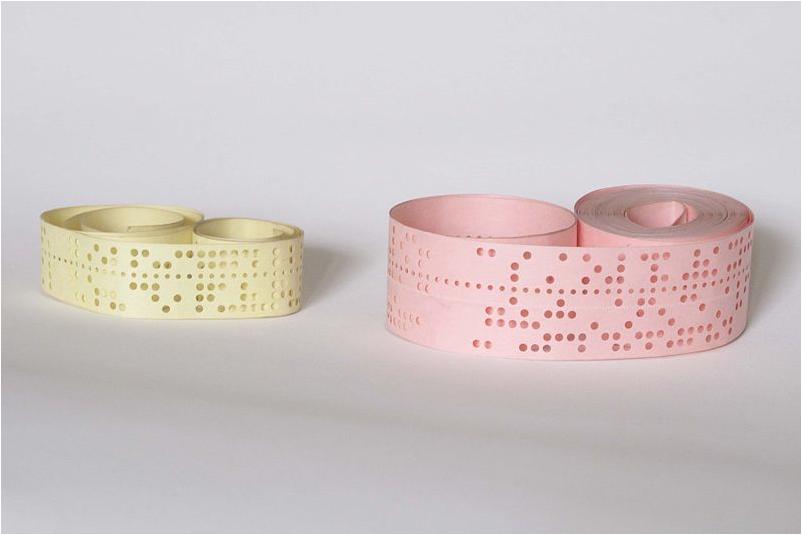 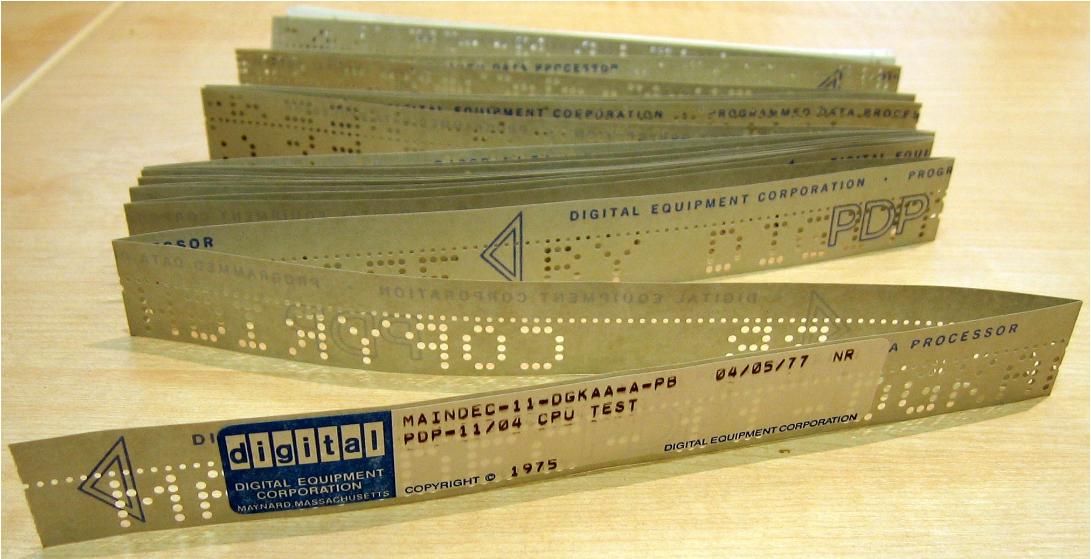 How Paper Tape works
How does it work? Basically by shining a light source through a pattern of holes punched in the paper tape which corresponds to the ACSII code for the desired character. Characters are read one at a time. The tape is advanced from one character to the next by using the sprocket holes in the tape which are the continuous line of small holes just below the centre of the tape, as shown on the right.

The image belowon the right is an animation to show paper tape in use. The black window at the top is where the characters which have been read will appear. The vertical grey bar represents the optical reader. As the tape progresses from right to left, the punched holes in the tape will be read as they pass under the reader. The read holes are shown in red. As each character is read, it is displayed in the window above. A very basic animation, but it hopefully gives an idea of paper tape in action. 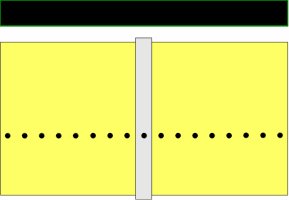 How big were the programs?
It obviously depends on the complexity of the program, but as there were computers running chemical plants which had only 16kB of memory

YES, 16kB. However, the program would be significantly smaller than that as there was also real time data to collect and store in the memory as well.

On the chemical plant where I worked, there were a number of process control computers with 24kB of memory where the program was loaded by paper tape. The operators controlled the plant by typing at a teletype, like the ASR-33 shown above. Critical information was displayed to the operators by printing it on the paper roll.

Windows? What Windows? Eat your heart out Bill Gates!

How was/is paper tape loaded?
Good question! It depends on the type of paper tape, roll or fanfold.

If it was in roll form, honestly, you would not believe how it was loaded. I worked on a chemical plant in the early eighties, and really, this is how it was done.

A pencil would be placed through the middle of the roll which would then be dropped into a plastic hopper like the one shown in the left hand picture below.picture immediately to the right The paper tape was then fed into a standalone reader on a table like the one shown in the far right hand picture. As the paper tape passed through the reader (from right to left in the picture), it was collected in a 3 foot high plastic clothes bin which stood on the floor at the end of the table. Honestly! 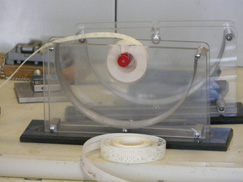 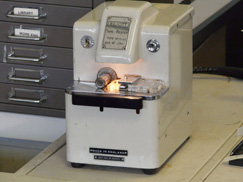 Rewinding paper tape
Once the program was loaded, hopefully without it breaking, the paper tape was collected from the plastic bin and rewound using a gadget like the one shown in the images below.to the right.

The end of the tape was placed into a slot in the small brown hub at centre of the left hand picture. You then turned the handle on the other side, bottom wheel in the centre image. While the tape was winding, you had to keep your hand against the paper tape to guide it onto the spool, sometimes getting paper cuts if you wound it too fast. The picture on the right shows a successfully wound tape.

Job done ... and I bet you think double clicking an icon to load a program in a few seconds is a real hassle!!

Whilst the paper tapes were much easier to handle and significantly easier to use, they unfortunately snapped more often than the roll tapes due to the folds. Mylar tapes were more robust than the paper variety.

If a tape did happen to break during use, and this was more common with regulalry used diagnostic tapes, it wasn't the end of the world. All that had to be done was to repair the tape. But how?

Repairing paper tape
The principle of paper tape repair was the same as that used to repair cassette and reel to reel audio tapes using a tape splicer, with the added funtionality that the program could be modified by using a stylus designed to punch extra holes in the paper tape if required.

If a paper tape snapped, it was repaired by applying patches which were either completely blank except for the sprocket holes, or fully punched with all holes.

Patches were applied while holding the tape in a paper tape editor!

Sadly, I have neither tape nor patches left these days, however; the picture to the right shows a roll of fully punched patches inside a dispenser box.

These are the very same sort of patches I used when I needed to repair snapped paper tapes.

Similar 'blank' patches were also available with only the sprocket holes punched. These were used when editing paper tapes.

Paper Tape Editors
Yes, there were such tools as paper tape editors. I know, because I have two and used them in the early to mid 1980's. The two editors that I have, are shown and described below. I used the editors in the 1980's when I was a Control System Engineer for a company called Fisher Controls. As an engineer I was predominantly involved in repairing process control systems, but also used to write software for chemical plants.

The first machine I was involved with was an Interdata model 70 with 24kB of memory. Plant software was loaded and diagnostics were run from paper tape. I also used to write small diagnostic programs which I converted into paper tape using a program called a 'Self Loading Paper Tape Preparator'. This program created the necessary loader information at the start of the paper tape to enable it to be used as a standalone program.

Which holes do I punch?
Ok, so you have a paper tape editor, perhaps similar to the ones shown below; to the right; but how do you know which holes to punch in order to modify your program?

The picture below shows the which holes correspond to which bits in an ASCII byte. This format is the one I was used to.

5 bit paper tape such as that used in COLOSSUS, used a Baudot or Murray code, where all characters and some punctutation were represented with 5 holes, rather than the 7 or 8 in what I would call standard paper tape.

The tape itself was 1" wide with the holes spaced 0.1" apart. 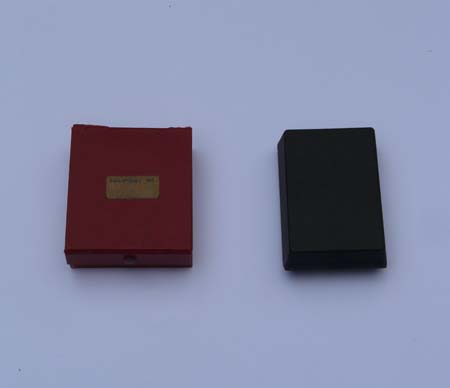