What got me into F1?
Ever since I was a young lad, I've loved watching Formula One racing.

In the 1960's, I remember watching 're-enactments' of Grand Prix races being run on Scalextric tracks on a children's TV program and thinking, this is great. I believe the program was called Tom Tom and Jeremy Carrad did the 'commentary'.

The picture immediately belowon the right shows part of the 'Tom Tom' racetrack from around 1968 where I remember seeing bits of Grand Prix being raced and crashes being re-enacted.

Sometime in the mid 1960's, I think as a treat for passsing my 11+ exam, the only one in the family to do so; I was given a Scalextric set as a Xmas present.

Now I was hooked and wanted to see the real thing, although I had to wait a few years for my first experience.

I still have my Scalextric with original cars and accessories such as a 'pit complex', some pictures of which, are shown below! 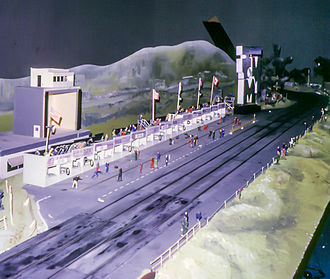 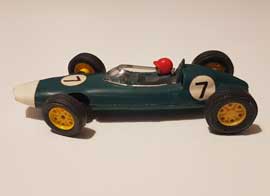 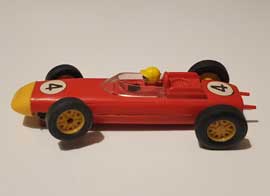 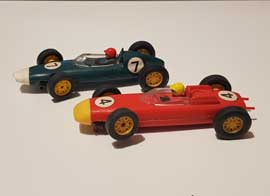 My first Grand Prix
The first Grand Prix I ever went to was the Dutch Grand Prix at Zandvoort in 1980. Since then I have attended almost every British Grand Prix including the years when there was a 'European' Grand Prix held in Britain. While watching Grand Prix, I indulged in one of my other hobbies, photography. I have quite a large number of photos from over the years, including pit scenes from the 'good old days' when you paid your £1 and got to wander around the pits before the race. It is these photos that I am posting on this site. They're not professional, scanned from the original 35mm negatives, but I hope they are of some interest to people who chance upon these web pages. They give an insight to the changing shape of cars over the years. Apologies for some of the pictures which are not as sharp as I would have liked. That said, I hope you enjoy.

What's the attraction of F1?
Many people question what I get from watching a few cars go round in circles and I have to admit that lately, racing isn't anywhere near as exciting as it was when I started watching Grand Prix in the 1980's.

However, I defy anyone not to get hooked once you've stood feet away from the track and listened to the sound of a Ferrari, a V12 Alfa or a Cosworth powered F1 car at full speed, screaming down Silverstone's Hangar Straight, or indeed, any other location/racing track.

Most memorable F1 moments?
If you're an F1 fan, then you are very likely to have your own memorable moments. A few of mine are shared below. These are the times I can remember that really stand out for me. When you're stuck in traffic and mud for four to five hours, simply trying to get out of the car park in a farmer's field as you regularly were in the 'good old days'; these are the times that make the hassle all worth while. Sadly, there aren't too many of these moments in the recent past.