Early days of computing
During the golden years of computing, when computers were understood by those people who had any interaction with them, there was little need to spend a lot of time making things look pretty.

Computers were functional, and for the most part, worked reasonably well. Software had moved on from paper tape to floppy disk and storage had increased. CP/M was still a major interface to the world, but DOS was fast becoming King.

Computer geeks
If you needed to 'do' anything on a computer, you had a command line interface and if you didn't know your BAT files from your EXE's, then you stayed well clear. All was well with the world. Geeks ruled, and others simply marvelled at their knowledge.

Sadly, the only constant is change, and change is not always for the best. One Geek wanting to bring computing to the masses was a Mr. Bill Gates, now of Microsoft fame.

Grudging acceptance & good old Bill
Most of us nowadays tend to accept the existence of computers. However, it was not always so! Back in the bad old days when microprocessors were only just coming to the fore, there was a great deal of suspicion regarding those new 'computers'. The problem Bill faced was how to get Joe Public to accept computers. DOS was no good for the average person, so what could he do, and how could he explain things to the world at large. This is the point where he got things pretty wrong. He overheard bits of a conversation regarding a 'gooey', that was being developed for 'Apples' and somewhere along the line, 'Jobs' were involved.

Unfortunately, Bill went off on a tangent and armed with terms like 'gooey' & 'Jobs', he tried to produce a document that would explain computers to 'the man/woman in the street', in terminology that they could relate to. The very document he developed which has remained hidden for many years, can now be exclusively revealed on this web site.

Sadly misunderstood
Whilst most people tend to deride Bill Gates for what he has achieved, little is said about his early work to promote the acceptance of the 'new technology'.

The-Manors web team acquired a copy of a recently discovered document, where it is obvious that Bill had realised the lengths to which he must go to explain the new machines in layman's language.

It is clear that such early, unheralded work by Bill Gates, has led to the wider acceptance of computers by 'non-nerds'.

Internet exclusive
Shown belowto the right for the first time ever on the internet, are Bill's first thoughts on computers for the masses.

Where would we be today without this layman's guide to understanding computer technology? Probably still using the abacus! I'll leave you to draw parallels with the Windows system yourself. 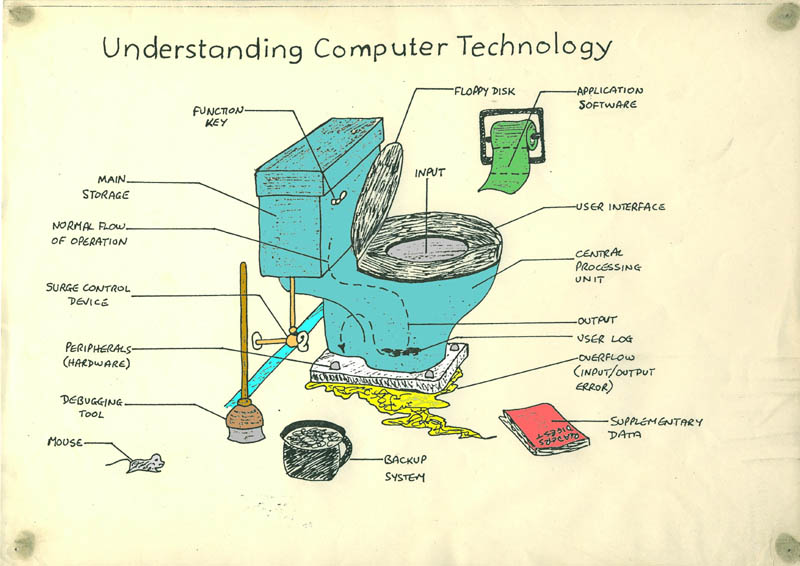