That's settled then. What's more, the engine pulling the train was one of Sir Nigel Gresley's A4 Pacifics, 'Union of South Africa', British Railways number 60009.

I'd seen 'Union of South Africa' in York Railway Museum at the 'Great Gathering' in 2013, where all the remaining A4 Pacifics were displayed together.

The pictures below were taken on the Cumbrian Mountain Express trip on August 23rd, 2014.

The trip
After being picked up by a diesel at the Metrocentre station in Gateshead, (it would have been so much better to have seen '60009' steaming across the Kind Edward VII bridge into Newcastle Central, but it wasn't to be .... this time!), we headed over to Carlisle where we would be coupled up to Union of South Africa.

There was a break of about an hour and a half in Carlisle originally intended for refuelling and watering. Once we were coupled up to '60009' and our scheduled departure time had arrived, we were off. We were steam hauled down the Carlisle to Settle section and on to Blackburn where the engine steamed off, leaving us to be diesel hauled back to Newcastle via York. On the journey from Carlisle to Blackburn, we stopped twice to be watered at Appleby, and then again at Hellifield station, a few miles South of Settle.

The route
The map of the route we took is shown belowon the right. After originally being postponed due to a fireman's strike (fear of a trackside fire), the trip went ahead on August 23rd, 2014. However, due to a continuing dispute, we were only allowed to be steam hauled between Carlisle and Blackburn. The rest of the trip was to be diesel hauled.

In actual fact, it wasn't so bad only being partially steam hauled. When you're sitting in the carriage enjoying your hot tea and sandwiches, the scenery doesn't look any different.

The biggest issue was for all the steam enthusiasts lining the route to take pictures and videos. There were people on bridges, the roadside, and in fields miles from anywhere, cameras on tripods at the ready. You could see them visibly confused and scratching their heads as a diesel engine shot past, not an A4 Pacific. Oh, the trials and tribulations of a train spotter! At least the enthusiasts weren't disappointed on the stretch between Carlise and Blackburn. 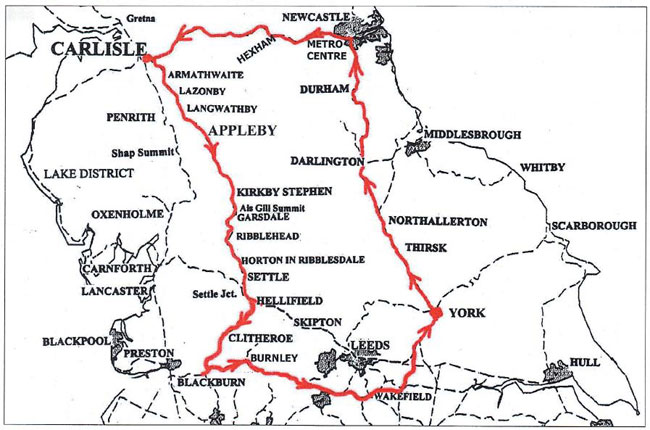 So what's an A4 Pacific?
These were streamlined engines designed by Sir Nigel Gresley. Only 35 were made in the mid 1930's. Probably the most famous of these engines is 'Mallard', which set a world speed record for a steam train of 126 mph in the hands of driver Duddington on July 3rd, 1938. The record still stands.

'60009' Union of South Africa is one of only six A4 Pacifics left, of which, three remain in running condition. Three are used only as static exhibits. All six surviving locomotives, (operational engines are highlighted in bold), Bittern, Mallard, Union of South Africa, Dominion of Canada, Dwight D Eisenhower and Sir Nigel Gresley, were all brought together at the Nation Railway Museum in York at the 'Great Gathering' in 2013.

Photos of the trip
The photos in the gallery are either of the train, or were taken from the train, during the round trip. Most, but not all have a short description of what is shown in the picture.

Viewing the gallery
To see all the photos, you can either use the left or right arrows on the main picture, or scroll through the thumbnail gallery to select a picture of interest. 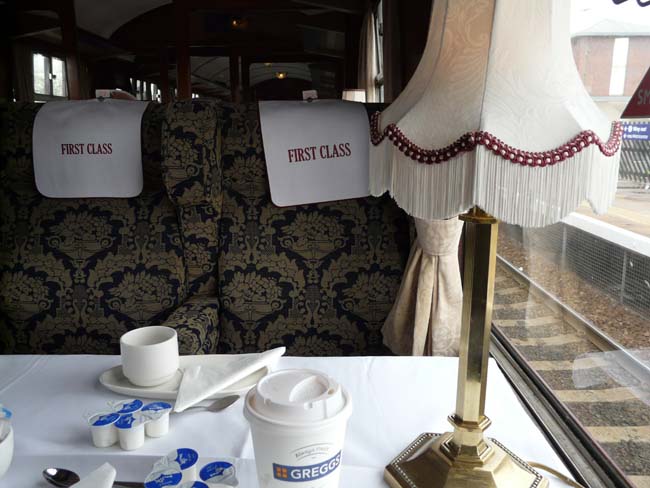