My track day at Silverstone

The driving experience starts from infield at Stowe corner, where you blast down a slip road onto the circuit at the Vale, just before getting to Club Corner.

Once out of Club corner, head up towards Abbey getting a feel for the car and circuit. Next you head infield and on to the chicane at Ireland.

The fast infield section leads back onto the Grand Prix circuit through the last right hand corner of Becketts. From Becketts, you're hitting the throttle hard as you go through the left hander at Chapel and out onto the Hangar Straight.

Starting out at the right hand side of Hangar Straight with your foot glued to the floor, take a diagonal line to position yourself at the left hand side of the track as you brake from 125mph in the Exige for Stowe corner.

Accelerate through the corner and feel the car drift to the outside then hit the power for a quick blast down into the Vale. Brake hard for the left hander into Club corner, it's a really slow corner, then squeeze the power back on and take an early apex as you go through Club.

Smooth acceleration through Club taking a wide line. Feel that Ferrari drift as you put the power down through Club and then head up to Abbey. Brilliant! This is sadly, where you temporarily leave the Grand Prix circuit. A tight right/left combination takes you on to the infield section.

Keep to the left of the track and turn in as late as possible to the right hander that leads into the chicane at Ireland. This means you can almost straight line the chicane with a good deal of speed, before a bit of braking as you head towards the right hander at Becketts that marks your return to the Grand Prix circuit.

A good exit from Becketts sets you up nicely to apply the power as you head through Chapel and back out onto Hangar straight for another time. Yeeehaaaaaaa. 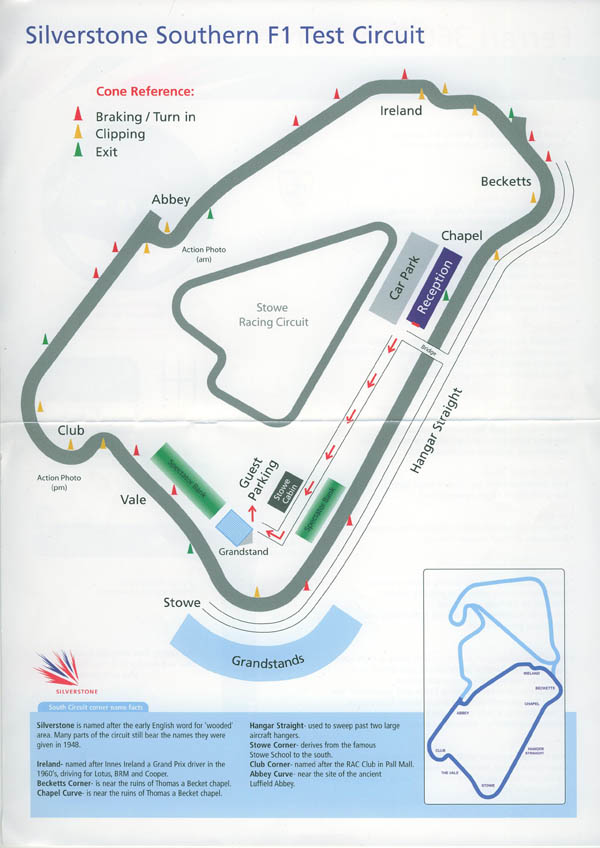