The initial system
For Colin MKII, I decided to use a Hitachi 64180 processor. It could address 1MB of RAM via an internal memory management unit, had on board DMA and a couple of serial ports. The Zilog equivalent wasn't yet available, and I wanted to prove to myself that I could design a computer.

For the operating system, improvements and additions were made to the original BOS, which I then re-named HBOS (Hitachi BOS).

Basic design
After many hours of design work, I finally had some system drawings, which I had broken down into four sheets covering:

Initially, I used the original VDU card from my Colin MKI system, until I could build one for Colin MKII.

Everything displayed correctly at first power on. I pressed "A" on the keyboard and hey presto, "A" appeared on the screen.

The down side was that when I pressed the "B" key, nothing happened. Power off & on, the same thing happened. I powered off and pulled all the chips, confident that my design was correct.

I spent a few hours checking out the multitude of connections and found one wire in the wrong place. This was on the Mode 2 interrupt circuit connected to the data bus buffer between the keyboard and the CPU. Once the one connection was put in the right place, everything worked OK, and the system booted from a floppy.

I had designed a working computer, starting from a blank sheet of paper and ending with a system that loaded the CPM disk operating system and would run any commercially available software.

Not bad for a first effort !!

Developments
Shown in the pictures below is the VDU interface I adopted for Colin MKII. This was so I had a sensibly sized display of 80x24 characters. My intention being to design my own video interface at some point in time.

The VDU interface was a design featured in Electronics and Wireless World in 1984 by John Adams. 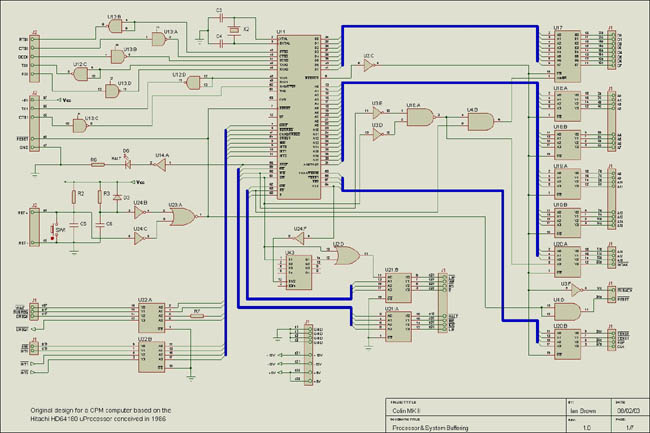